STORIES FROM THE LAGOON

The Indian River Lagoon holds a special place in our nation’s history. It also holds a special place in the hearts of the people that have shared in the wealth of its resources, spent time within its waters, grew up in its communities, or that have simply visited long enough to create a lasting memory. It is one of the most biodiverse places in the continental U.S. and it is truly a national treasure. This is meant to be a collection of those memories to preserve them for years to come. You are encouraged to share your favorite lagoon memory or simply partake in reading the stories below.

In December of 2013, I was able to achieve a childhood dream of mine that consisted of exploring the entire IRL. With a small group of new and old friends, we left JB’s Fish Camp in New Smyrna on an early December morning and paddled our way to the Loxahatchee River Center in Jupiter. It took 19 days, amounting to 170 miles and was a true adventure. I was able to gain a whole new respect for our cherished Indian River Lagoon. – Mike Conneen

I feel so fortunate that I my job is to introduce and share the beauty and joys of the Indian River Lagoon with adults and children alike. I love it when people become inspired to protect the lagoon and it is an honor for me to help them change their behaviors when I can. I have been doing so for 15year and it never gets old. The Indian River lagoon is literally the reason I come to work every day. – Heather Stapleton 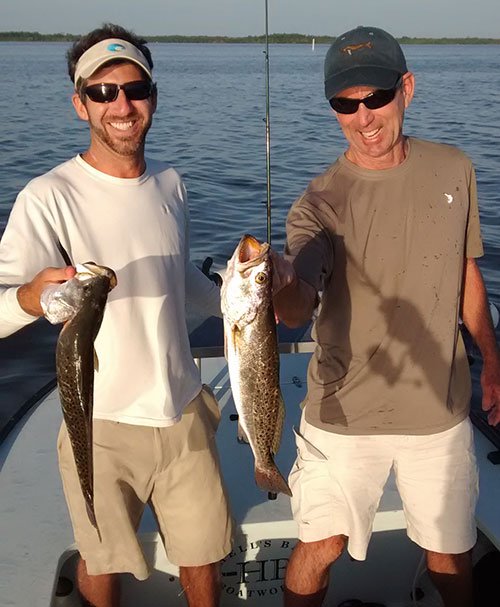 To celebrate my father’s birthday, we decided to take a family fishing trip in Mosquito Lagoon. Our group split up into three boats and fished our hearts out, competing for titles such as ‘First Fish’, ‘Biggest Fish’ and ‘Most Fish’. We had a perfect day on the water and all spent the evening swapping stories over a delicious feast. – Annie Roddenberry

When we first moved here around 12 years ago, I took my son George along for a Spoil Island clean up. As the rest of us picked up trash, eight year old George had his first experience fishing in the Indian River Lagoon. He hooked into a big trout that literally towed his kayak around. He was so proud of catching that fish in front of a crowd, that he became an angler for life. I want all families to have that opportunity. – Keith Winsten

For the last decade, I’ve dedicated my life to helping to ‘Save our Lagoon.’ Fortunately, it’s not only my personal passion but also my career to help this gem that is right in our back yard. I do it because it’s the right thing to do, I do it because every creature and plant residing in the lagoon deserves a clean, healthy place to live and I do it to make the world a better place for my son, Graham. – Jody Palmer, Director of Conservation at Brevard Zoo 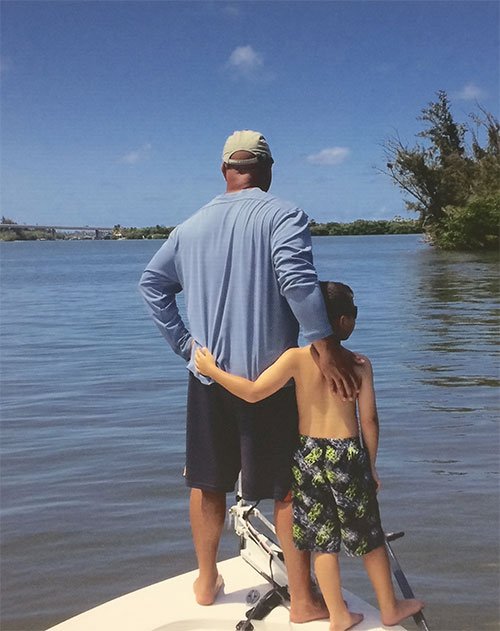 Back in 2015, several months after we moved from Titusville to Vero Beach, we finally got the boat into the water. As we enjoyed an afternoon exploring and moving through the flats my wife snapped this pic. This hangs over my desk, and it struck me one day that the most important person in this photo isn’t even in the picture, because she took it. I love this memory. – Frank Sakuma Jr.

Several years ago, I was helping out on a high school kayak trip, pulling up the rear with 3 teen girls who really had no interest at all. We were far behind everyone else and the girls were pretty much just sitting in their kayaks in the shallows. I heard a small splash and was surprised when I turned and saw a dolphin approaching with a tiny calf. Well, the mom came right up to my boat, keeping her body between me and the calf as the calf took in the scene and checked us out before casually swimming away. I’d love to say the girls thought it was awesome but they remained indifferent. I, on the other hand, had enough excitement for all of us! I still think about that special encounter when I need a bit of inspiration to get out of bed in the morning and work another day to protect the lagoon. – Kathleen Hill 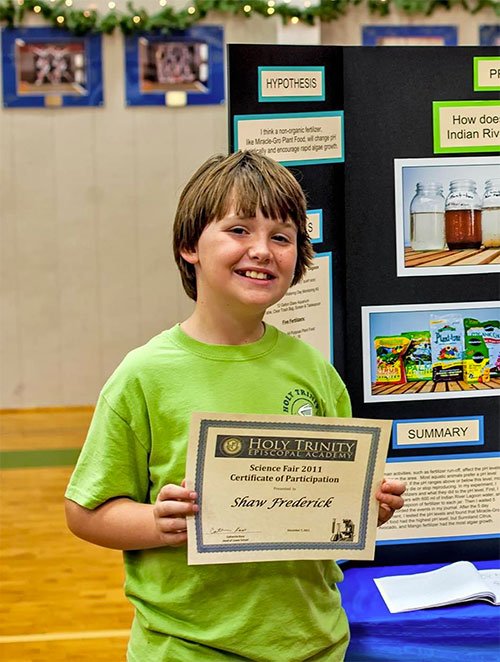 My wife Helga and I have been fortunate to live on the shores of the Indian River Lagoon for 43 years. We purchased a lot in 1973 on what is now called Dragon Point, at the convergence of the Banana and Indian River Lagoons. We moved into a newly constructed house with our eight-year-old daughter in 1974.

Our lot has a natural mangrove shoreline on the Banana River.  We have always enjoyed the wildlife that comes to visit.  Dolphins, pelicans and ospreys are seen nearby almost every day.  Migratory birds frequent the mangroves seasonally.  Otters visit occasionally and leave their smelly scat. A large variety of fish and other marine life can be found beneath the water’s surface.

We have watched the human population more than double on South Merritt Island and in the nearby barrier island communities. While the wildlife are clearly not as abundant today as they were in the seventies, we still live in a paradise for enjoying natural Florida. A pair of screech owls can be heard calling most evenings around sunset. Red-bellied woodpeckers have built a cavity in a neighbor’s palm tree, and they are raising their young.

A few years ago, our daughter Liz returned to live nearby with our now 16-year-old grandson Shaw. He spends many hours outside and often on the Lagoon in a kayak or small powerboat. Perhaps he too will be able to enjoy an Indian River Lagoon life. – Vince Lamb

SEND US YOUR STORY